The college has been consistent in its ranking, as it has been ranked #3 by NIRF #3 by Outlook #2 by India today #2 by The Week. All the ranking agencies which have ranked the medical college of India have consistently ranked Christian Medical College in top-5 from last 4-5 years, which shows the performance of the college and the name and reputation it has made since it establishment.

NIRF, National Institutional Ranking Framework, was launched in 2015 by the Ministry of Human Resources and Development, Government of India. To give the general ranking to the institutes across India each year.

Christian Medical College has maintained its ranking which #3 for last 3-4 years.

The table below is the list of parameters and score CMC, Vellore scored in each parameter out of 100. 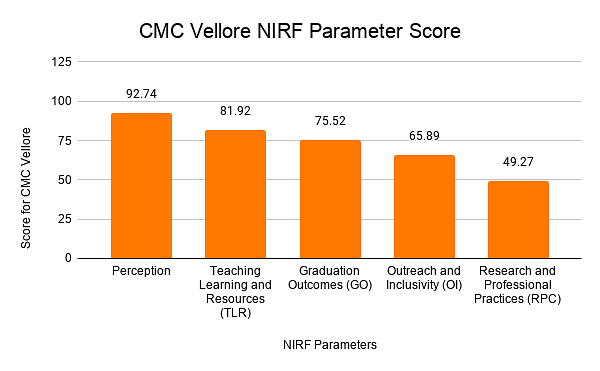 The ranking forum considers its own parameters which are Institute Profile (200), Academics (250), Infrastructure and Facility (175), Personality Development Exposure (200) and Placement and Graduating Income (175). Final scores are calculated using the sum total of all of these parameters.

CMC Vellore ranks third in the outlook ranking in the Medical category of 2020.

The table below is a list of parameters involved in the ranking and score scored by Christian Medical College, Vellore in each parameter. 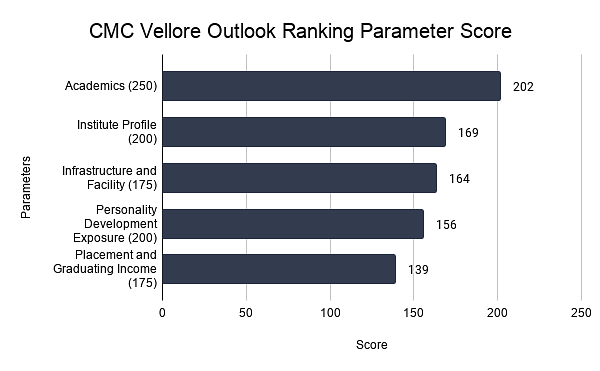 The table below is the list of top-10 medical college as per THE OUTLOOK ranking agency.

The Week has ranked CMC Vellore at second position which is consistent since last two years. AIIMS Delhi has topped the list likewise in other rankings too. Given below is list of colleges ranked by The Week Ranking

Further studying the list we get to know that AIIMS DELHI, CMC Vellore, Institute of Medical Sciences, BHU, Maulana Azad Medical College, Delhi has maintained their positions. GMC Mumbai, KMC Manipal BMCRI Bengaluru are some of the colleges that have made a positive change in their ranking in 2019 as compared to their ranking in 2018.

From the last two years, CMC Vellore has maintained its position of rank 2 in the India Today ranking.

The below table shows the list of top10 medical colleges in India for the last three years.

From the above table, we can see and analyze that the Christian Medical College Vellore is consistently in top-3 since 2017. Which shows the consistency and hard work of the college. Vardhaman Mahavir Medical College and Grant Medical College are the new entrants into the list of the top-10 medical college in India in 2019

In my course there is internship. So when our course finish then we start doing it. The pay us a decent amount which is a good thing.

Yup,it is actually pretty good,most of our alumni get selected to research in prestigious colleges and set up various clinics all over the worlds,most of them usually get into being a missionary doctors in India and africa

"Best college for MBBS in India"

"To be the best you need to be with the best"

It's a medical profession. there's no campus interview kind of stuffs. you have a two month internship which college helps to get you through. following that most of the seniors are currently working in various projects.

"One of the best colleges"

My college provides internship and stipend. Amazing hands on experience will be taught during internship. Every person gets posted in different departments over the period of one year. And it goes on like a rotation.

NEET 2020 will soon be released online and could be checked via online mode. The purpose of releasing the NEET 2020 cut off West Bengal is to provide the last qualifying rank with which the admissions will be closed for the respective category. The State Counsel Conducting Authority will publish the

Christian Medical College is well known for its old heritage of caring people in motive of healing ministry of Jesus Christ.

The college management is good always as they are friendly.