Here,we are free enough to choose our own paths.we are not spoon fed and are not always being watched.It is only you to lead into a right way.Everything comes out of our own experience.Rather than studying it's all about learning life at GCT.

Over all college is good.faculties are very supportive and students run all the societies.

Government College of Technology is affiliated to Anna University, Chennai was started in July, 1945. GCT offers undergraduate, postgraduate and Doctoral programs in all major departments. 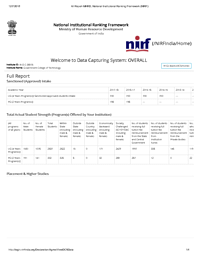 Anna University has asked the Department of Higher Education for the new dates for the conduct of the end-semester examinations.Earlier in the month of December 2020, Chief Secretary K. Shanmugam had written to the Registrars of all universities, setting the approximate dates for the examinations to

Anna University Colleges:&nbsp;About 276 seats in B.Tech and BE courses at Anna University colleges remain vacant after students chose to discontinue their courses and take up other subjects like medicine.&nbsp;The vacant seats opened up once these students moved to other courses even after receivin

Anna University has released&nbsp;TANCET 2021`Application Form, today (January 19, 2021). All the eligible candidates can proceed with TANCET 2021 registration at the official website: tancet.annauniv.edu.&nbsp;&nbsp;The&nbsp;TANCET 2021&nbsp;application form&nbsp;will be made available till Februar

Anna University facilitates an on-site provisional admission drive for its students who are willing to join the Illinois Institute of Technology to pursue their postgraduate studiesAccording to G Nagarajan of Anna&nbsp;University's Center for International Relations, the faculty will be interviewing

Following the direction of Madras High Court, Anna University has decided to conduct arrears with semester exams for its students. It also opened its web portal for students to register for arrears. Read full story After hearing a batch of petitions challenging the government's order to can

Tamil Nadu Common Admissions (TANCA): The tentative allotment list for differently-abled (DA) candidates has been released by Anna University on the official website @annauniv.eduApplicants can apply to TANCA counselling based on a valid GATE or&nbsp;TANCET&nbsp;score. During the counselling process

Colleges affiliated to Anna University have begun their new session from November 23, 2020. The online classes have been a regular course structure in this pandemic situation.Colleges have now adopted the internet broadband connectivity, digital mentorship programs, membership to virtual labs, equip

Management is very good towards students growth and success.

My college containe only good habits. They are too good in their own way.

No my college doesn't get any bad remarks. My college is top 5 college in tn