Kaleidoscope is derived from the Greek 'Kalos' and ‘eidos’, meaning “beautiful” and “what is seen”, respectively and ‘skopeo’ meaning “to look”. The kaleidoscope was created by Scottish inventor, David Brewster. Kaleidoscope is an optical instrument that is made up of two or more reflecting surfaces. These surfaces are tilted towards each other at a particular angle in order to obtain symmetrical patterns when seen from the other end.

What is a Kaleidoscope?

Kaleidoscope is an optical instrument that is made up of two or more reflecting surfaces. These surfaces are tilted towards each other at a particular angle in order to obtain symmetrical patterns when seen from the other end.

Laws of Reflection of Light 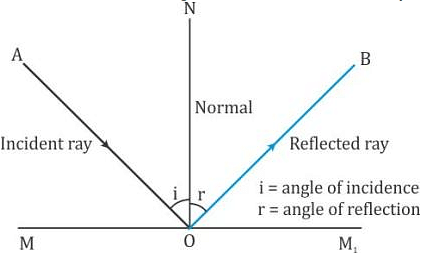 White light consists of a combination of seven colours or VIBGYOR.When white light strikes the surface of a mirror, it gets reflected in a way that the angle of reflection equals the angle of incidence. There are several mirrors lined along the length of the tube within a kaleidoscope.

Thus, light rays hit one mirror surface after the other and several reflections take place within the kaleidoscope. It is because of these reflections that beautiful patterns are formed. 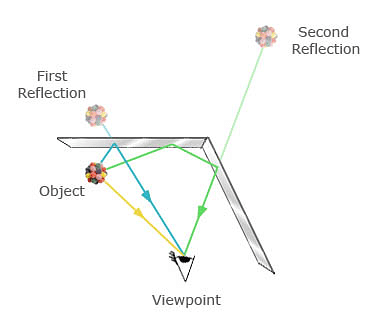 When white light passes through the coloured objects, most of this light is absorbed by the objects present in the Kaleidoscope.

How to make a Kaleidoscope

Kaleidoscope works on the principle of reflection. Therefore, here are the steps that can help you in making a kaleidoscope. 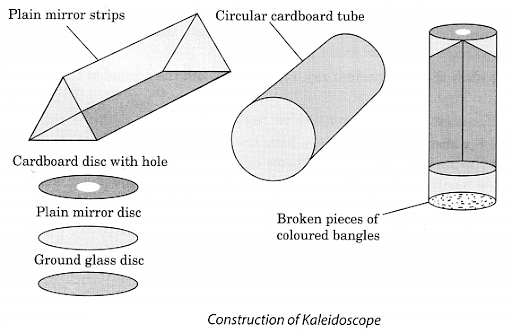 Get the three mirror pieces and roll them in the form of a triangle. Make sure that it is solid and is taped at the exterior of the triangle.

Sketch the small triangle that is present at the edge of the kaleidoscope to the transparency paper (keep 1 cm extra around the triangle for allowing folding of the paper).

After that, place the transparent paper at the edge of the Kaleidoscope. Cut thin openings at the corners for easier folds.

Now, fix the paper into a separate place.

Draw another triangle, but this time make it 2 cm larger than the earlier one.

Select the kind of plastic colour you would want to have inside the kaleidoscope. Take some small paper cuttings that can be placed on the transparent paper.

Place the colored plastic pieces at the end of the kaleidoscope that has transparent paper. Attach another triangular transparent paper that is larger than the first one. gPlace the second triangle upside down so that there is enough space for plastic to move between the two transparencies.

And, once you are done with the making of kaleidoscope, you can design it beautifully with glitters, colours and so on.

In order to understand what happens in a kaleidoscope, imagine a pizza; each slice of the pizza depicts the object put within the triangular area at the edge of the tube. Now, if you place the slice of pizza within two mirrors that are kept adjacent to each other at an angle; you will be able to see almost the entire pizza. This will be through the multiple reflections of the single slice appearing side by side. 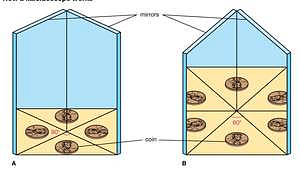 Just like a pizza, which is circular in shape; each triangle portion within the kaleidoscope is just like the part of that circle. If the size of the wedge or the slice is large, then the angle it makes at the centre of the circle will also be large and vice-versa. 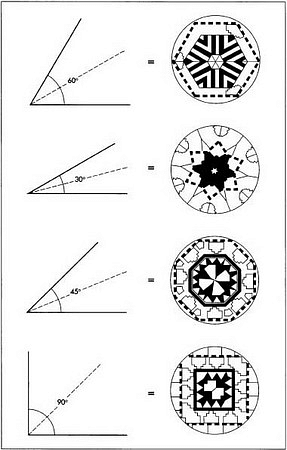 Therefore, the angle formed by a single slice or wedge in a circle would decide the number of reflections of the given slice. In a kaleidoscope made of two mirrors, there will be four reflections of the slice in the images that appear at the end of the tube

In a kaleidoscope, each reflected image is symmetrical to the image that appears next to it. As the mirrors in the tube get close, the symmetrical patterns will get better at the end.

Uses of a Kaleidoscope

Kaleidoscope is an optical toy which consists of two mirrors placed at particular angles. Some of the uses of kaleidoscope include:

- Creates beautiful patterns that are usually used by fashion designers.

- Can be used as a toy for entertainment. 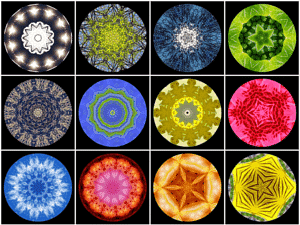 Ques. Is there a kaleidoscope with a single reflecting surface? (1 mark)

Ques. What is meant by interference of light? (1 mark)

Ans. Interference is the process in which two light waves overlap to form the resultant wave of the higher, lower or same amplitude.

Ques. Can two patterns in a kaleidoscope be the same? (1 mark)

Ans. The patterns in a kaleidoscope are formed after it is rotated or shaked. Therefore, the kaleidoscope objects will not be arranged in the same way as before. Thus, no two designs can be perfectly identical when seen from the other end.

Ques. Which principle explains the working of Kaleidoscope? (1 mark)

Ans. The working of Kaleidoscope is based on the principle of reflection of light.

Ques. Write the difference between a 2-reflect and a 3-reflect kaleidoscope? (1 mark)

Ans. In a 2-reflect kaleidoscope, two mirrors are at a three-sided vertex. The side of the triangle that is left is made of a non-reflecting material, basically dark. This arrangement makes a roundabout picture that is known as a mandala. In a 3-reflect framework, however, the third side of the mirror triangle is a genuine mirror. This arrangement makes a consistently reflecting system.