Indian Institute of Management (IIM), Bangalore is one of the top-ranking B-Schools in India and abroad. Committed to evoking leadership, IIM-B offers distinct career outcomes.

The latest National Indian Ranking Framework (NIRF) 2020 ranked IIM-Bangalore in the second position. Since its inception in 2015, NIRF has ranked IIM-B, seemingly budging between the top two ranks.

Earlier this year, prestigious international daily Financial Times released the Global MBA Rankings, which awarded it 27th rank. The institute has been the sole Indian B-School to make it to the top 50 ranks.

As acclamation knows no bound, IIM-B received cross-border recognition from QS Business Rankings 2020. The excellence of its Executive MBA Program made the institute notch at rank 26.

Alongside, QS Global MBA Rankings also offered 44th place to IIM-B, being the second only Indian B-School after IIM-Ahmedabad notched up at 40.

National Institutional Ranking Framework (NIRF) is a ranking methodology for higher education institutions in India. Adopted by the Union Ministry of Human Resource Development in 2015, NIRF Ranking 2020 witnessed an e-release.

This year, IIM Bangalore lost ground at first rank to IIM Ahmedabad, receding to the 2nd position, repeating its feat of 2018.

Following are the parameter-wise scores of NIRF Management Ranking awarded to IIM Bangalore in 2020: 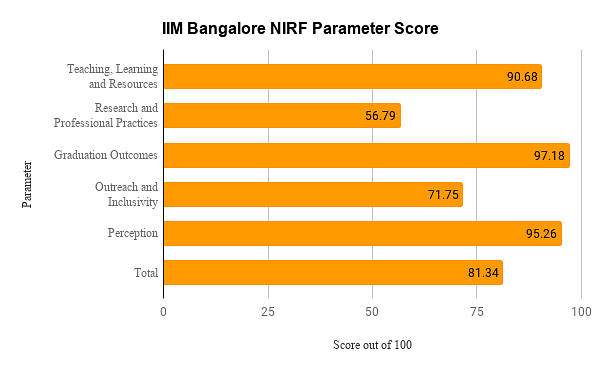 Outlook-ICARE India MBA rankings 2020 has awarded the first position to IIM Bangalore, scoring 91.77 out of 100.

This ranking system evaluates public and private institutes offering MBA degrees in India. The rankings are provided based on internationally acclaimed and employability specific parameters backed by in-depth research on industry-specific insights such as:

Tabulated below are the scores for QS Business Masters Ranking Criteria:

IIM Bangalore, this year, secured 44th position in QS Global MBA Rankings 2020. This year saw 5 eminent B-Schools of India made it to the top 200 positions. 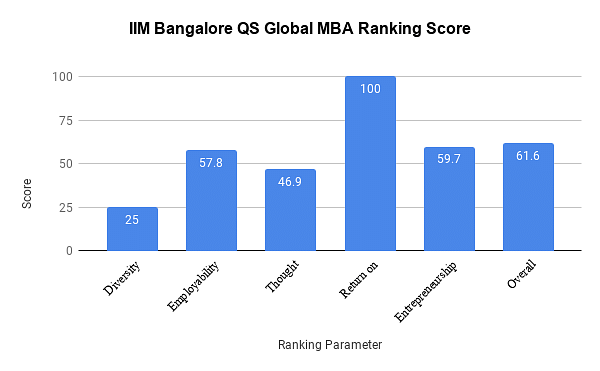 The Economic Times offers functional level rankings to MBA Colleges in India. The chief functions considered for B-School Rankings include Finance, HR, IT, Production and Marketing to offer overall rank.

IIM Bangalore has been ranked 3 in the Economic Times B-school rankings 2020 in India. The detailed rank breakdown is tabulated below:

Every year, Financial Times- an economics and business daily of global repute, publishes world rankings of B-Schools. The rankings are set based on 20 different criteria audited by KPMG.

Ques. How can I get a visit into the IIM Bangalore campus?

Ans. The security at IIM Bangalore is quite strict. Not anyone can visit the institution for a tour. But if you are genuinely interested in a campus tour here's what you can do. If you want to visit IIM Bangalore, it is best if you know a student or you can connect with any of the faculty members. As IIM Bangalore is very strict in terms of security, you cannot enter the institute otherwise. You can visit the campus during the fests such as Vista, eximius, Unmaad, etc. IIM Bangalore conducts various seminars and workshops which can be attended by outsiders. You can enroll yourself in one of these seminars/workshops. However, you have to maintain discipline while visiting the campus. Hope this helps.Read more
0
1
Share
FacebookTwitterCopy Link
1 Answer
●●●
Upvote
Downvote
Report

Ques. Which must one choose: M.Tech. from IIT Bombay or MBA from IIM Bangalore?

Ans. My brother studied at both institutes. He did his B.Tech from IIT Bombay and MBA from IIM Bangalore. According to him, it totally depends on what your interests are and what you want to do in your career. If you are looking more for a technical career then go for M.Tech but if you are more interested in managerial roles then you should go with MBA. Here is a comparison between the two institutions. Particulars IIM Bangalore IIT Bombay Average package offered 29.98 LPA 18 LPA Placement rate 100% 100% Top Recruiters Accenture, Bain & Co, Amazon, Microsoft, McKinsey and Company, IBM Consulting, etc. Microsoft, Google, Texas Instruments, Qualcomm, Boston consulting Group, Apple, etc IIM Bangalore and IIT Bombay both are among the most reputed institutions in India. Having said that, the selection criteria for both the institutes are completely different so make sure you are 100% interested in the program you choose.Read more
1
1
Share
FacebookTwitterCopy Link
1 Answer
●●●
Upvote
Downvote
Report

Ques. What is the process of registration for IIM Bangalore MOOCs?

Ans. IIM Bangalore has been patched with only one site for MOOCs which is edX and if you wish to pursue MOOCs through IIM Bangalore, you don't need any registration. All you have to do is create an account or you can also sign up via Google, or Facebook account. Once you get registered, you can search for the university/institution with the course you are interested in. On edX, IIM Bangalore offers 5 programs. Along with this they also offer 45 courses. Some of these courses are free, however you have to pay a small fee to get the course completion certificate.Read more
2
1
Share
FacebookTwitterCopy Link
1 Answer
●●●
Upvote
Downvote
Report

Ques. How much are IIM Bangalore Executive Education Programs are valued in the job market?

Ans. I have a friend who is an IIM Bangalore alumnus and he was able to provide some information regarding the Executive Education program. The faculty for the executive education program is the same as the degree program. However, in this program, you will gain knowledge that is tailored to your career. Faculties teach their latest research in this program, and you will get the same networking opportunities in the program. The following points will help you understand how this program will help you in the job market. Brand Value: Executive programs are quite competitive and employers look at these programs favorably. Also, having the tag of IIM will definitely make your resume stand out. Peer Group: You will get to interact with experienced professionals from the industry as peers and also as course instructors or speakers. The network you build there will be valuable in the future. Industry-specific learning: Executive programs are more tailored to the challenges and problems that you face in the industry. This will definitely help you more. Executive programs also have strict eligibility requirements based on your years of experience, managerial levels, etc. So, the students are screened for these programs, contrary to the common belief. Overall, doing an executive education program from IIM Bangalore will add value to your resume.Read more
2
1
Share
FacebookTwitterCopy Link
1 Answer
●●●
Upvote
Downvote
Report

Ques. Why did you choose IIM Bangalore over IIM Calcutta?

"Indian institute of management for IT executives"

No placement for course I opted. For other courses they provide placement with average salary of 23+ lakhs.

The placement committe and the career development services handle the placements, and we have 100% record in summer and final placements every year.

Many leading companies visited our college for campus placement, companies like Accenture, Deloitte, Global Banks, Anheuser- Busch-Inbev, Nestle, etc were the top recruiters of our college. Our college provides summer internships after the 1st year of the course with the stipend of around Rs. 50000 per month.

"One of the best colleges in Bangalore"

The placement opportunity in our college was good. 100% of the students were placed. The highest salary package was around Rs.50 LPA and the average salary was around Rs.20 LPA. Our college also provides internships for and I received a stipend of about Rs. 10K.

Getting 2 years MBA done from the top MBA colleges includes around INR 1 crore and it is definitely a huge amount. But wait, this does not mean that you have to compromise with an executive MBA degree. We have found 6 alternatives to finance your MBA studies after cracking GMAT that too in the forei

US in MBA is not the only aspiration students have, Europe is home to excellent MBA colleges which prove to be the best ROI colleges in the world. MBA aspirants are always concerned about the debt that they have to incur for pursuing a management degree abroad, the average salary they are receiving

Students of the Indian Institute of Management Bangalore will organize Eximius 2020, India&rsquo;s largest entrepreneurship summit for the first time on October 17 and 18. The event will be held online. Eximus is held every year with vivid highlights. The event aims at celebrating entrepreneurshi

October 03, 2020
US MBA Programs with Best Return on Investment

The US is the leading nation for pursuing education with home to universities like Harvard, Stanford, MIT, UCLA, and more. While cost is a big factor in determining which business school to pursue the course in, it should also be mentioned that the US is home to some of the best MBA programs with th

October 03, 2020
GRE Score Waiver: Is It A Permanent Solution for Public Health Programs?

During the Covid-19 pandemic, a lot of new changes were visible in the education system and the most remarkable change was made in terms of the standardized tests. The public health programs of University of Michigan had accepted the GRE score waiver policy for a year or so. As a result of it, other

A recent meeting on Thursday saw the undergraduate senators debating on the discarding of the GRE exam as a requirement for their graduate admission as it incites racial injustice. The Graduate student Council landed with 5 resolutions neither of which the senators passed any bill or resolution on.

"Indian institute of management for IT executives"

No placement for course I opted. For other courses they provide placement with average salary of 23+ lakhs.

The management does an amazing job to keep it the top B-School in the country for years.