Chandigarh University enjoys quite a reputable status amongst many national rating agencies that evaluate the quality of education, research activity, affordability, and athletic excellence. The University became “The Youngest University” to be ranked by NIRF, Govt. of India. It has been ranked 117th out of 200 for its Engineering division and 64th out of 100 for its Management division.

The university set up the benchmark by being the First Indian university to hold Limca Book Of Records for Highest Number of Recruiting Companies in one academic year. Chandigarh University has been awarded the prestigious A+ grade by the National Assessment and Accreditation Council (NAAC).

Aside from the above-mentioned accreditations, the university is considered amongst the top 50 private state universities by the Outlook-ICARE India University Ranking 2019.

On an international scale, Chandigarh University has been honored with the award of "University with Best Placements" and also with the title of Asia’s Fastest-Growing Private Education Institute by WCRC Leaders.

Aside from the awards and the titles, CU also has a vast Alumni network of over 38879 candidates who are all currently working under some of the best MNCs in the world. Ever since it’s inception, the university has witnessed a steady growth in terms of placements.

During the latest recruitment session, the University hosted more than 627 Top MNC's who made 6314 offers with the highest package ranging at INR. 31.77 LPA which was bagged by some students from the Engineering discipline.

Under the Department of Management, a total of 710 job offers were made and over 175 students bagged more than 2 offer letters. The highest Package offered was INR. 14 LPA.

Taking a comparative view regarding the ranks attained by similar institutes, the following statistics can be observed-

The NIRF has allotted the following ranks to the below-mentioned universities situated within the state of Punjab.

Based on the data presented above, it is quite evident that the Chandigarh University has managed to settle amongst the top 200 universities under the category of Engineering, though if compared to its contemporaries like TIET or PTU, the university still has a long way to go to be considered at par with the other two.

The score obtained by CU in various parameters of NIRF 2019 (Engineering) is as follows: 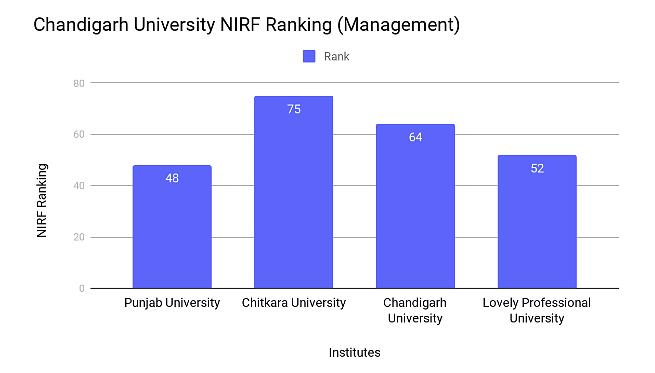 As per the graph presented above, under the field of Management, CU is amongst the top 100 institutes of India as suggested by the report published by the NIRF. Though Punjab University is ranked at the 48th position in terms of the best Management Institute located within the region of Punjab.

The university was ranked on the basis of the following parameters-

The Outlook I-CARE announced CU amongst the Top 25 Young Universities in 2019. The universities are ranked as per the following parameters-

Given below are the top ten young universities as suggested by the Outlook magazine:

With reference to the data given above, CU has garnered the 7th position amongst the top ten young universities within the country. Manipal University is a step ahead of it with just a .19 scale whereas Chitkara University has been ranked at the position of 8th best university.

The latter is one of the four major competitors of Chandigarh University situated within the state of Punjab.

India Today rated the Chandigarh University at 16th position out of the top 30 universities within the country. It was given an overall score of 9.27 out of 100.

“The college is the best in terms of infrastructure, faculty, facilities, Student-management relation. The hostel facilities are also best in class. The most attractive and best part of this college is the academic structure and placement offers that they are way way better than other colleges.”

Ans. HPTU has its own popularity from some of the colleges under its name. All the colleges are not up to the mark when certain things like Faculty, placement, infrastructure, or alumni are considered. On the other hand, Chandigarh University (CU) holds a great reputation. It has great placement records in North India. So it is recommended that among the two opt for CU as it will prove to be beneficial to your career.Read more
0
0
Share
FacebookTwitterCopy Link
1 Answer
●●●
Upvote
Downvote
Report

Ques. Which is better Chandigarh University or DAV College Chandigarh?

Ans. It is dependent on the course you wish to enroll in. Some courses are quite popular at Chandigarh University, whereas others are popular at DAV College. If you are looking for better infrastructure and placements, Chandigarh University should be preferred over DAV. It has been awarded an A+ grade by NAAC and is the only state-private university to be accredited by NAAC. The curriculum followed at CU is industry-oriented and based on market standards. The level of exposure you will receive here is exceptional with numerous opportunities. Apart from this, Chandigarh University has tie-ups with international institutions. The university has recorded excellent placement records with participating companies like Microsoft, Google, Amazon, IBM, Walt Disney, Oracle, and many more.Read more
0
0
Share
FacebookTwitterCopy Link
1 Answer
●●●
Upvote
Downvote
Report

Ques. Should I take an M.Sc in chemistry admission from HPU or Chandigarh University?

Ans. Without any doubt, you should get admission to Chandigarh University for MSc in Chemistry. Here are a few reasons why.  Chandigarh University is the youngest university to get NAAC A+. The Honors Degree in Chemistry at UIS - ranked among the Top and Best BSc and MSc (Hons.) Chemistry colleges in Punjab. It gives you an advantage of the professional standards, along with the ability to tackle ethical challenges occurring in the field of modern science, and technology. Chandigarh University offers an Internship from Mid May to July (2 months) after the 2nd sem. As students start sitting in placement drives from the 3rd semester onwards, it's the best time to get such exposure so that they are well prepared to face the interviews. You can opt for internships of your related interest as CU has collaborations with many industrial or academic partners. Students get successfully placed for internships in forensic and non-forensic fields. The chemistry department also has faculty with vast Industry experience which helps students in selecting the best for them as per their future aspirations. Most faculties are from IITs, NITs, and GATE qualified with Ph.D. degrees and have at least 3-4 published research papers. Most of them also have postdoctoral degrees from renowned foreign universities. Panacea Biotech, SENTISS Pharma, Swiss Garnier LIFE SCIENCES, IIT Indore, CSIR Palampur, IISER Mohali, Indian Council of Agriculture Research (ICAR) Center, CSIR, IIIM Jammu are some of the institutions offering internships. With all these good reasons I suggest you join Chandigarh University.Read more
0
0
Share
FacebookTwitterCopy Link
1 Answer
●●●
Upvote
Downvote
Report

Ques. Which one is best for an MCA HPU Shimla or Chandigarh University?

Ans. Having a friend studying at Chandigarh university I can tell you some reasons for joining Chandigarh University. Infrastructure: The infrastructure at CU is the best. There are classrooms and Labs/Library, university management systems (online attendance, online marks, display system, etc) with 24 hour WiFi. Facilities: The college follows an Innovative Curriculum providing live projects, good faculty, guest lectures/workshops, Training and Internship, the best method of assessments and evaluation, Inter-discipline minor, Mentoring and Advising, Placements/Entrepreneurship, Alumni, and Scholarships. Placements: In the last placement drive, around 691 companies participated. The highest package offered was INR 35 LPA (CSE). There are several industrial visits, workshops, competitions, etc. throughout the year to boost your technical skills. You will get guidance regarding patents, startups, etc. There is a dedicated Cell for that. Based on all these factors I will recommend that you join Chandigarh University.Read more
0
0
Share
FacebookTwitterCopy Link
1 Answer
●●●
Upvote
Downvote
Report

Ques. What are some helpful tips for students starting their first year at Chandigarh University?

Ans. According to one of my friends who studied at Chandigarh University, the pressure of studies will be lower until your first year. As the number of semesters increases, the pressure of studies and placements will increase.  Some important tips for your first year at CU are: Your first priority should be your studies. Many seniors may tell you that the CGPA you acquire is not important and that you should pursue your passion instead. But it is not true.  In the end, your academic score and skills will matter the most. Join some university clubs while you're studying, as there are plenty at Chandigarh University.  This will boost your self-esteem and improve your abilities. Never meddle with your professors as they could have bad results. If you don't pay your fees on time, you'll never know how much you'll have to pay in fines.  The University charges hefty amounts as a fine for late fee payments.  If you wish to borrow a book from the library for six months, you must have at least an 8.0 CGPA; otherwise, you can only borrow books for five days. One thing you should always remember is to take good care of your ID Card. As if you lose it, you'll have to pay a fee of INR 1000 rupees. Overall try to enjoy these first years as gradually it will get tougher.Read more
0
0
Share
FacebookTwitterCopy Link
1 Answer
●●●
Upvote
Downvote
Report

September 15, 2020
Admission for Architecture Course Starts, Merit List to be Released by 1 October

The Directorate of Technical Education has initiated the admission process for architecture degree course seats. This comes after holding the National Aptitude Test in&nbsp;Architecture (NATA) held across India, including Goa. The DTE will accept filled application forms from students from 15

QS- IGauge-India, the India specific rating agency for the Quacquarelli Symonds, London has awarded Shri Dharmasthala Manjunatheshwara Institute for Management Development (SDMIMD), Mysuru he highest level of &lsquo;Diamond&rsquo; rating among the management institutes of India. On receiving the

The result for the NATA 2020 Phase I is expected to be declared on the official website today. Earlier the result was to be announced on September 3, 2020, which however got delayed.&nbsp; NATA 2020 first test was held on August 29, 2020 and the secondary exam by the Council of Architecture (

On 29 August, at least 100 students from Goa took the National Aptitude Test in Architecture (NATA), which is given for admission to degree courses in architecture. 47 students took NATA at the centre at MICE, Margo, while 52 students took the test at Don Bosco College of Engineering Fatorda.

Council of Architecture (CoA) will be holding the first attempt of NATA 2020 tomorrow i.e., August 29, 2020. Applicants appearing for NATA 2020 have an opportunity to appear both home based and as computer based tests at exam centers. CoA released the NATA 2020 admit cards for the first attempt o

As per the latest update, Council of Architecture (CoA) has released the&nbsp;NATA Admit Card on August 25, 2020. Earlier, the NATA 2020 Admit Card was to be released on August 24, 2020. However, there was a delay.&nbsp;Successfully registered candidates can download their NATA Admit Card for the fi

Chandigarh University has been ranked as the leading standalone university by Office Controller General of Patent Design and Trademarks, Government of India, as it filed the highest number of patents (700), within just 7 years of its inception. Satnam Singh Sandhu, Chancellor of&nbsp;Chandigarh U

The architecture course will undergo some reforms this year. On 11 August, the Council of Architecture released the Minimum Standards of Architectural Education Regulations for 2020. According to the new norms, students can now leave the course at the end of three years; the university will a

Very nice and lively events with many events occurring throughout the event period. The best time of the year is undoubtedly the even semester as the events are conducted during this time like RX, Spectrum which has a variety of co-curricular and extracurricular activities and interesting one day

Very nice and lively events with many events occurring throughout the event period. The best time of the year is undoubtedly the even semester as the events are conducted during this time like RX, Spectrum which has a variety of co-curricular and extracurricular activities and interesting one day