Indian Institute of Technology (IIT) Madras has maintained an excellent placement record over the years. The institute witnessed a breakthrough in terms of placements as a total of 1300 students participated in the recruitment drive.

The institute offers seven different degree programs along with an MBA program offered by the Department of Management Studies.

The highest number of students were recruited by the IT sector followed by the Analytics/Consulting/Finance sector.

The MBA Batch of 2020 at DoMS consisted of 65 students from across India. 63 students participated in the placement drive while 2 opted out. The batch had students coming from diverse backgrounds like engineering, commerce, hotel management, arts and pharmaceutical science. The average work experience of the batch is 19.5 months in diverse sectors like Banking, IT, Finance, Education, FMCG, etc\

Towards the end of the IITM Final Placement session, the students witnessed an overwhelming surge of placement offers as more than 246 companies visited the campus. The highest CTC offered was 1.33 Cr. Per annum whereas the average annual CTC was around INR. 16.1 LPA.

The students received offers from over 13 international companies. Some of the major international recruiters in IIT Madras placements were- Microsoft, Uber (US), Rubrik Inc (US), and Micron Tech (Singapore).

A total of 102 job offers were made by 20 companies during the first session of Phase I placements of the IIT Madras, the offers include four international offers.The first slot of Day 1 of IIT Madras placements commenced on December 1, 2019 Sunday at 7 am and concluded at 2 pm with the participation of 20 companies, covering 34 job profiles.

In the second slot of day one placements was held between 4 pm and 11 pm where 30 companies put forth over 42 job profiles. Some of these companies included Samsung Semiconductor, Jaguar and Bajaj Auto.

The B.Tech. program under the department of CSE bagged the highest CTC of INR. 113 LPA followed by the Dual Degree program with the maximum CTC of INR. 92.94 LPA. 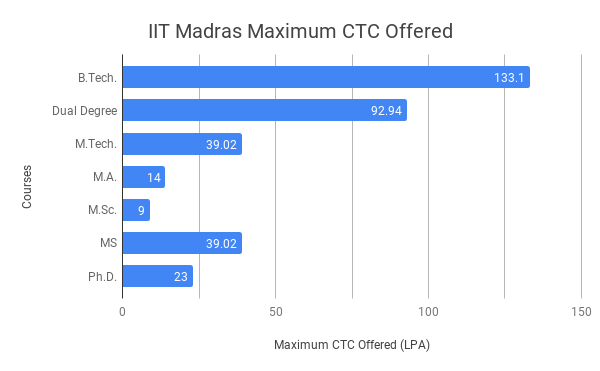 As per the data presented above, it is evident that the institute witnessed an outstanding placement session with some delightful salary packages. Although, In comparison to the rest of the degree courses, the M.Sc. program secured the lowest CTC of 9 LPA.

In comparison to all courses offered at DoMS IITM, MBA bagged the highest salary offer, while MS by Research bagged the lowest salary package of 15.96 LPA. 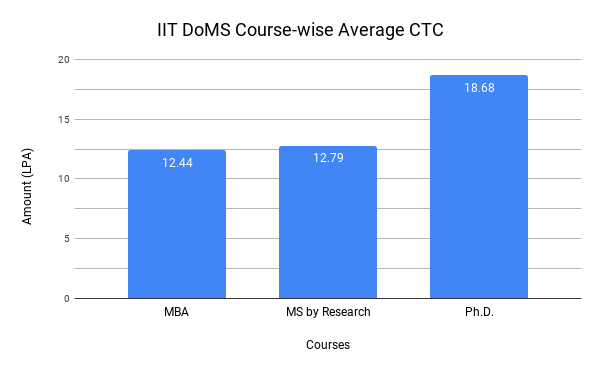 A total of 61 companies from the Analytics/Consulting/Finance sector visited the campus and recruited more than 204 students. The highest number of students (234) were hired by the IT sector.

27% of the total placements were made by the IT sector followed by the Analytics/Consulting/Finance sector with 23% placements.

19% of the placements were done under the Core sector, No recruits were hired by the R&D sector. 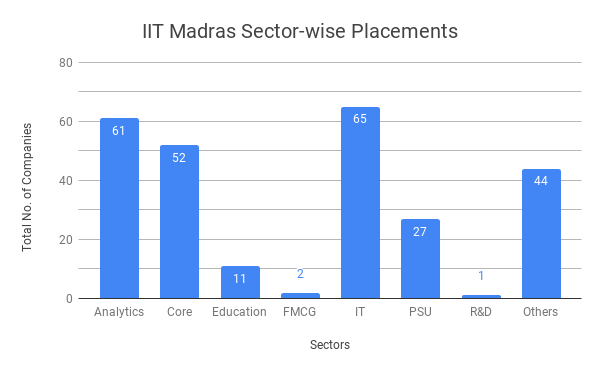 For the Management programs at DoMS IITM, the following statistics were observed:

Different industries recruited candidates as per their work experience, The Analytics sector came up with 33% of the total placement offers. The highest CTC offered by it was of INR. 15 LPA. The key recruiters were- Accenture, Ford, and Wipro.

The Consulting sector came up with 26% of the total placement offers. The highest CTC offered by it was of INR. 16.8 LPA. The key recruiters were- CISCO, IBM, Micron Tech.

The Marketing and the Operations Sector recruited over 8% and 6% of the batch respectively and offered the highest CTC of INR. 29.1 LPA each. The key recruiters were- AG Facilities, VIP, Zycus, Amazon, and McKinsey.

The branch wise percentage of placement for the year 2018-19 is given below:

Microsoft put forth a total of 22 job offers whereas Intel brought out 26 job offers. 13 and 16 placement offers were provided by American Express and Flipkart respectively.

The institute offers some great internship opportunities to students so they can learn and understand the way of working in an organization. Recruiters incorporate core engineering firms, analytics companies, startups, FMCGs, leading banks etc.

Ques. Which course is better (package-wise): HSEE at IIT Madras or IPM at IIM Indore?

Ans. HSEE at IIT Madras is humanity and social sciences course so don’t expect a satisfying placement after pursuing this course. If you are willing to opt for civil services after the end of this course, then you may go for it. The highest package offered so far has been 12 LPA. Your placement package is determined by your caliber in the field.  Whereas IPM is a 5-year integrated course at IIM Indore. It endows you with an MBA after graduating from this 5-year course. Placement opportunities are tremendous in this course. The average salary ranged around 15.6 LPA for the students of the IPM batch.Read more
0
0
Share
FacebookTwitterCopy Link
1 Answer
●●●
Upvote
Downvote
Report

Ques. What is best for a civil engineer fresher, NITIE PGDPM or IIT Madras structural Engineering?

Ans. NITIE Mumbai and IIT Madras are both among the most reputed engineering colleges in India. Both of these colleges have a great curriculum and the faculty members are highly qualified. However, if you see from the placement point of view, then NITIE PGDPM is the better option. NITIE has an amazing placement record with an average CTC of 20 LPA. After 10 years if you have the right skill and talent, you can expect your salary to be around 50 to 60 LPA. On the other hand, in IIT Madras the average CTC is around 15 LPA and after 10 years your salary average belongs between 25 LPA to 30 LPA. The highest package this year is 88.82 LPA but that doesn’t give a clear picture of the placement drive as the average CTC is less. So, judging by placement record, NITIE is definitely the better choice between the two as it has a better ROI.Read more
0
0
Share
FacebookTwitterCopy Link
1 Answer
●●●
Upvote
Downvote
Report

Ques. What is the syllabus for first semester B.Tech in IIT Madras?

Ans. You should prepare yourself for the overall year that you are going to have. You will come to know about the academic nitty-gritty on your way. The syllabus is definitely vast as the IITs will help you develop yourself more as a person than a student. You can find the syllabus for the first year on the official website. You will find the syllabus of different branches on their departmental pages. If you have any specific doubts you can reach out to the current students or alumni of the institute. There is an IIT Madras Freshman Forum.Read more
0
0
Share
FacebookTwitterCopy Link
1 Answer
●●●
Upvote
Downvote
Report

Ques. Which is better: Anna University or IIT Madras?

Ans. IIT Madras is definitely the better option. It is the top-ranked institute among other IITs. If you are considering doing some part of your education abroad, the college also has collaborations with Germany that help you become eligible for semester exchange programs. Moreover, you will also be able to use a wide range of machine-building mechanisms that may not be available in other engineering colleges. In terms of faculty, research facilities, peer group, IIT Madras is way better than Anna University. Here is a brief comparison of the institutes. Institute IIT Madras Anna University Average CTC 14.79 LPA 4.71 LPA Highest CTC 88 LPA 6.57 LPA Major Recruiters Microsoft, Qualcomm, Goldman Sachs Axis Bank, IBM, Dell, Google Overall, IIT Madras is definitely better than Anna University. The IIT tag will have a better impact on your career too.Read more
0
1
Share
FacebookTwitterCopy Link
1 Answer
●●●
Upvote
Downvote
Report

Ques. How much should one score in their GATE examination, to get a seat in IIT Madras?

Ans. If you are talking exclusively about GATE, remember, the results depend upon your rank. If you were to opt for CS (general category) and have a rank below 150, your chances of admission are high. This may be the same for other branches as well. Ranks vary with the specialization you opt for. For instance, when it comes to electrical, VLSI is one such specialization that fills up before others. For VLSI, your rank should be close to 100. As far as CS is concerned, you do not need a specific specialization. No interview would be conducted and your admission would depend upon one factor- your GATE score. For MS, there would be a proper entrance followed by an interview and its eligibility depends upon your GATE score exclusively. Admission Procedure: All IITs conduct their own admission and almost everyone applies there. Because of this, not one, but 4-5 lists are published by IIT-M because of the number of varying offers. Spot admissions also take place in the case of seats that remain unfilled. All the information about these spot rounds would be disclosed on the website.Read more
0
0
Share
FacebookTwitterCopy Link
1 Answer
●●●
Upvote
Downvote
Report

The placement percentage is almost 100% at the college. The placement team helps students during the placement time. The team conducts several interviews and competitions so that the students become placement ready. Major companies visiting the campus are Google, Microsoft, Adobe, etc. The research and startup culture at the college is wonderful. Some famous startups by college allumnis are Network18, Infomedia 18, etc.

Sanmar Shipping Ltd, Goa Shipyard Ltd, Mazagon Dock Shipyard, Vedam Design, Cyber marine, Keppel fell offshore Singapore, Transocean. The general steps is a test, hr round, technical round followed by interview.Tentative percentage 75- 90 %. No we were selected based on our merits and institute will only guide us if we want to have any special needs to develop our aptitude and English.

Job placements are some of the best in the country, sensitive branches like Metallurgy and Naval Architecture and Biotechnology are hard to get a core placement, but non-core jobs are plentiful. Average packages are around 13. 6L and the college does provide a paid internship in the 3rd year.

Sathyabama Institute of Science and Technology

Not Statement of Purpose, commonly known as SOP, is an essay&nbsp;that is a significant component of each applicant&rsquo;s full profile in addition to grades, test scores, and other information. Generally written in 1000-1500 words, it&nbsp;should reflect your personality; creating a bridge between

October 02, 2020
IIT Madras teams up with MIT to work on Efficient Utilization of Industrial By-Products

Indian Institute of Technology (IIT), Bombay has extended the registration deadline for GATE 2021, till October 7, 2020.&nbsp;Check the direct link, revised dates, details below.&nbsp; GATE 2021&nbsp;registration began on September 11, 2020, and was slated to end by September 30. However, on the

AIMA has released the MAT 2020 Admit Cards for September PBT. Candidates can use their login ID to download their Admit Card. Get Direct Link to Download here The September PBT Admit Card for MAT 2020 is available for download now. Candidates who have registered for the MAT PBT examination can do

Mention the Good and the bad aspects of your college Discuss the Admission Process & Dates Reason of preferring this college over othersName of any blog, forum or website used while selecting this college

The college is one of the top engineering college of India. Also the IIT tag helps a lot during placements. Also the research culture at IIT Madras is awesome. The infrastructure, academics and campus is also very much student friendly.

I am so fortunate to study in a wonderful college. Its like a dream to get a seat in my college and if I get a chance to study again I would like to thank my management at IITM.