Nothing tell about bad things only good thing are there.

"The world of black magic and happiness"

One of the black mark was the job recruitment cell

Internship is after the final year and is a one year programme which provides about 25000 monthy income. Placement is simply we are a doctor from the most reputed college of kerala. So there is a higher preference.

Government Medical College was started in the year of 1951 as a first medical college in the southern state of Kerala.  The Government of Travancore appointed a committee in the year of 1948 to formulate the proposals for starting a Medical College at Trivandrum. But its report and scheme which was submitted by the Committee was sanctioned in the month of October, 1948. The college is financed and managed by the Health and Welfare Department, Government of Kerala. It offers Graduate, Postgraduate and Postdoctoral levels courses in the field of Medicine, Public Health, Nursing and Pharmaceutical Sciences. In 1951, the college was started with an annual intake of 60 students but in 1983 it was increased to 200.

It provides super-specialty block along with state of the art technology and modern equipments and carries more than 2500 beds for inpatient care. The college and hospital building are also separated by playground for football, court of tennis, basketball and volleyball. It is ranked among the top 20 medical colleges in the country. 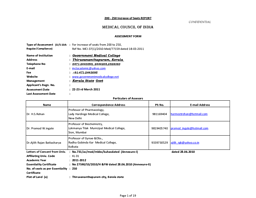 A
Anonymous
Can I get contact no. Of college.
A
Anonymous

Hi Rahana, to get details on courses of this college, please find the link http://collegedunia.com/college/10466-government-medical-college-thiruvananthapuram/courses-fees

A
Anonymous
how to apply B Pharm in government colleges
A
Anonymous
i want to know how much fees for MBBS in govt. Medical college Thiruvananthapuram
B
Bharti Yadav

Hi Dalvi, for fees of MBBS, you may click the link http://collegedunia.com/college/10466-government-medical-college-thiruvananthapuram/courses-fees

NTA is currently accepting challenges from students in the event of a discrepancy until 7 October, although students feel that this option is useless in certain situations. Read Full Story.Graduate Medical and Dental aspirants pointed to differences in the assessment of their NEET&nbsp;2020 answer b

NEET 2021 Cut off for Medical Colleges in Meghalaya refers to the minimum score that medical aspirants must secure in order to get admission to the leading medical colleges of Meghalaya. Cut off will be announced by North Eastern Indira Gandhi Regional Institute and Health and Medical Sciences-&nbsp

Tripura NEET Cut off 2021 will be released after the conclusion of round 1 of state-level cousnelling process. Last year, NEET cut off rank or closing rank accepted by the Regional Institute of Medical Sciences, Imphal for the general category candidate was&nbsp;37942.&nbsp; Tripura NEET 2021 Cut

Karnataka NEET Cut off 2021 for 15% AIQ seats and for 85% state quota seats will be released separately on the official websites of the conducting body. In the 2019 session, the closing rank accepted by&nbsp;Bangalore Medical College for admission in MBBS under&nbsp;state quota seats for the general

I like homoeopathy and wanted to be a Doctor.Efficient teaching faculty,pleasent atmosphere,freedom of expression,best infrastructure are qualities I like.Hospital attached to the college also have good infrastructure and facilities like general op,special op department, ultrasound scaning,echocardigraphy,x ray.speech and language therapist and dietition also available.so that we can learn more from each department.

Our college has excellent library and reading room facilities. All lecture classes are air-conditioned. Lab infrastructure is nice. The college union provides good support to all students in developing their talents as well.